Not to go down too deep into the sordid realm of “gossip blogging” but I came across this story that had a bit of a linguistic bent and it was tangentially related enough I figured I’d post it here.

As many (everyone?) knows Tom Cruise and Katie Holmes welcomed and addition into the world yesterday named “Suri”, and according to the happy couple’s publicist:

The name Suri has its origins in Hebrew, meaning “princess,” or Persian, meaning “red rose,” the statement said.

Apparently the thought of this has had some people who are more familiar with Hebrew a little amused:

“Nobody here has ever really heard of it,” an announcer on Israel’s Army Radio said during a discussion Thursday. The Yediot Ahronot newspaper agreed in its half page splash on the celebrity birth.

“We seem to have learned a new Hebrew word and from Tom Cruise, no less,” said a Channel 2 TV anchorman.

The way the article describes it getting “princess” from “Suri” is a pretty circuitous route and even then it’s a bit of a jump to make the final connection.

You can’t blame the Cruise’s though a quick search for “Suri” on babynames.com came back with “Princess” as the meaning. I wonder if it’s simply a case of “lost in translation” as names get handed down and such.

It’d be interesting to know what level of research/fact checking actually goes into Baby Name books and the origins.

UPDATE: Evidentally not much fact checking takes place. If you click through to the record for Suri on Babynames.com now they’ve changed the meaning overnight to be “Wealthy”. Well we know that Suri is certainly that.

It’s a strange question but actually it illustrates an interesting example about how when considering “localization” in any sense you need to think of so many factors regardless of how obscure they may seem.

Recently I was reading a thread of discussion on a message board that started out on the topic of “Do you Canadian’s really not lock your doors?” (started by someone a little late to the party who had only just seen Michael Moore’s “Bowling for Columbine” recently). As things are apt to do on a message board the topic strayed and somehow we ended up on the topic of whether or not you expect guests to remove their shoes when they come into your house.

Surprisingly the yes/no split was almost exclusively down the same line as the Canadian/American split of the posters. The Canadians (myself included), almost universally said “Yes” the expect someone to take their shoes off in most cases and vice versa, the Americans said “No” – some going so far as to say that they would consider it rude if someone came into their house and just removed their shoes.

I think what is important to note too is that in this case it’s not like the two countries that are perceived to have two radically different cultures. We’re close neighbours and have very similar outlooks and customs but it’s the minutiae that could make you stumble.

Had I gone to any of those poster’s houses before that conversation I likely would have removed my shoes, believing it to be rude not to, all the while offending them by coming across as presumptuous and making myself a little too comfortable for their liking.

Localizing applications to a person’s native language is a great idea, there’s no disputing that but a common mistake, one that I think will happen more and more unfortunately, is a company making the assumption that because someone is in County “X” they will also speak the native tongue of that country.

I came across this post on the “webreakstuff.com” blog. It’s a pretty good look at few of Google’s missteps when it comes to localizing their interfaces. Primarily the fact that they first start off by localizing the site to the native language of the country that you’re viewing the site from. Now in their defence they did provide the opportunity to specify another language if you can’t read the native language.

The problem? The menu item is in the native langauge, so to change the language you need to be able to read the native one (Strike Two). Then, if you can manage to find the right drop-down you’ll be surprised to find that all of the language names have also been translated. Three Strikes. Out.

Although – it’s a strange challenge to try to overcome. How do you indicate the language drop down? What language do you put it in? I’d suggest the best approach would be a universal icon that represents “Languages” somehow. It’s a lofty suggestion but I think one that’s ripe for the right person to come along and design – look at how well the “XML” orange box took off. Any takers?

As for the translated drop-down menu – I’m not sure what they were thinking there. It’s pretty standard practice to list the language names in their native language (i.e. English, Français, 简体中文, Español, Deutsch, 日本語)

In the end I think it’s a major error to assume that a country neccessarily = a language. It’s about the same as using flags to indicate language, a topic I talked about here previously.

It’s interesting how a simple meander through a completely unrealted topic can sometimes provide you with a useful nugget of information.

I was reading an article on CNN about ABC’s recent announcement that they are going to run a test program where they will offer streaming feeds of their prime-time TV series over the web the day following their original air date, for free. Very cool news unto itself as at least one network starts to show some willingness to muck with the format a bit.

But partway down the screen was an interesting statistic. The article mostly focuses on the declining usefullness of 30-second spots on TV. To illustrate the point they showed a graphic that laid out the growth (or decline) or advertising dollars across a variety of mediums. 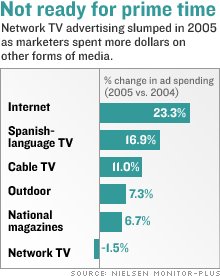 After Internet, the second largest growth area for advertising dollars?

It’s an interesting up-stream indicator as the TV ad is really one of the broadest nets you can cast – and if a marketing group is spending their dollars wisely it also means a serious amount of follow-on translation work for websites, brochures and packaging materials.